The Sweet, The Sour & The Boozy: the secret history of the Whiskey Sour

Happy National Whiskey Sour Day! The Whiskey Sour is unique in its subtle and beautiful balance of sweet, sour and boozy.  In honour of this beloved cocktail - that has been making quite a comeback - we'd like to share a couple tidbits about it as well as some easy to make recipes!

If you've had a Whiskey Sour, you'll know that it's made up of some of the simplest ingredients - but can really pack a punch. The balance of sweet and sour makes for an interesting and refreshing cocktail that is great for a night out, or just sitting at your favourite bar, chatting with friends. The original Whiskey Sour was first created as a cure for scurvy and used by the British on long sea journeys in the 1700s. Vice Admiral Edward Vernon of England conceived the drink by throwing together some of the few rations that sailors had at their disposal: limes and lemons (to prevent scurvy) and liquor as a base. After being a huge success with the sailors, this drink was taken ashore and refined into what we know and love today as the Whiskey Sour.  Since then,  there have been many iterations and variations of this drink, and since the actual recipe was not written down until 1862, there were many people making the Whiskey Sour with gin, brandy and even rum. 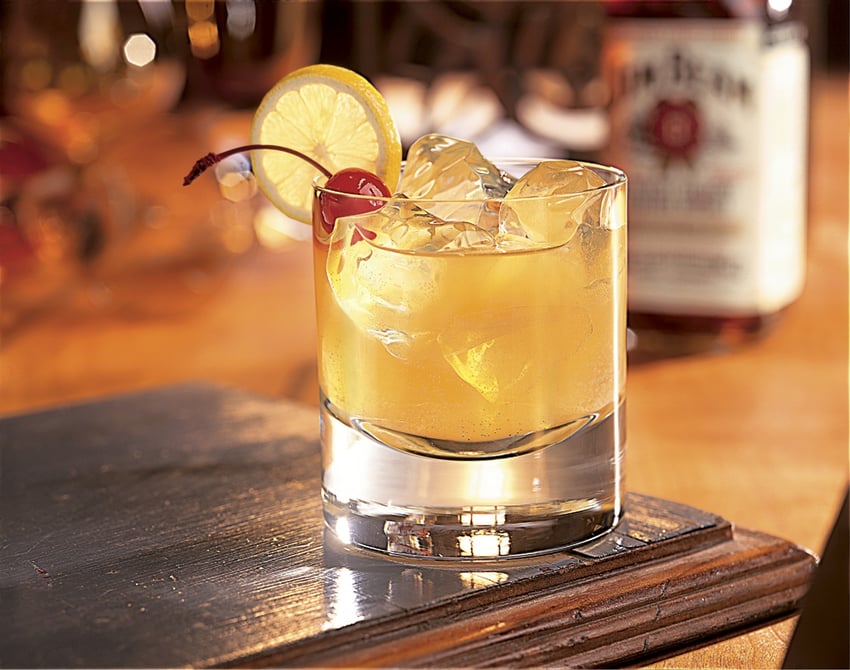 Here is the original recipe from the 1862 book, The Bartenders Guide, by Jerry Thomas - note that there no mention of that creamy, frothy egg that is sometimes included:

Fill the glass full of shaved ice, shake up and strain into a claret glass. Ornament with berries.

As a comparison, we've added the current recipe for the drink. Check out the difference that a few hundred years can make:

Pour the ingredients into a shaker over ice. Shake well, then pour into a rocks glass over ice. If you are using the egg white you can use as much or as little in the cocktail as you want. Dry shake (no ice) vigorously to get the white foamy element before adding ice and other ingredients. Egg proteins do not bread down without a fight, and this will froth them up nicely. Adding the ice and other ingredients at thesis phase may put too much water into the cocktail. You can adjust the ration simple syrup and lemon juice to taste.

The Whiskey Sour is a mainstay and can be found at any Canadian bar or restaurant; it's as versatile as it is delicious and if you choose to make it on your own, know that you can change things up and swap out different base spirits as well as change the sweetener you use (some people have used agave nectar, or more popularly: honey). Try the above recipes and see which you like! Alternately, if you're looking for some unbeatable variations, check out this link.

Thanks to The Alcohol Professor and Wikipedia for background on the history of this drink.