If you've watched any cooking shows, or been to any Japanese restaurants, you may have heard the word "umami" being tossed around. You would have experienced this relatively 'new' taste if you've ever eaten something that danced across your palate and you were unable to describe the taste. Is it salty? Sweet? Or was it somewhere smack dab in the middle of two tastes? Biologically as humans, our  tongues are hardwired to taste and understand 4 'primary' tastes: sweet, salty, sour and bitter. Many chefs are known for artfully combining some or all of those tastes in their cooking, but sometimes some other, undefinable taste can stick out. This is umami.

Umami is now being heralded as the 5th taste - one that has been around forever, but has never had anyone attempt to describe it, until the 19th century. Umami is a borrowed word from Japanese, and can be translated as "pleasant savoury taste." The flavour was first described by Chemist and food-lover Professor Kikunae Ikeda in 1908. He created the word by taking two Japanese words: umai "delicious" and mi "taste" - and if you were to look back and attempt to describe it, it would be just that, a delicious taste. Pretty apt, we think! Umami has a long history; aged cheeses and fermented fishes from Ancient Rome were rife with this flavour, and Asian cuisine has a long history of umami-rich foods. Ultimately, scientists assume that this taste is achieved from a form of saltiness, and taken in by something called a glutamate receptor. A molecular change happens when foods begin to age, are fermented, or when meat is cooked over an open flame. According to this Food Republic blog,

"In this process, the proteins are completely broken apart into various units, one of which is a molecule called L-glutamate — the singular molecule responsible for umami. Similar to the other four basic tastes, umami is sensed when L-glutamate binds to specific receptors on your tongue, causing a chain reaction of chemical processes resulting in taste. "

It's that deliciously fatty kalbi rib. It's that juicy and ripe tomato, the sweet and savoury shrimp, or even that salty parmesan cheese. It can take the form of a specific ingredient or an added spice or condiment (think miso, oyster sauce and fish sauce). Umami can be described as a pleasant "brothy" or "meaty" taste with a long lasting, mouthwatering and coating sensation over the tongue. So, what other foods are known for this flavour? If you're looking to get your tongue blowing up with taste, here is a great list that will help you. Click through the link for a more comprehensive breakdown on each food item. 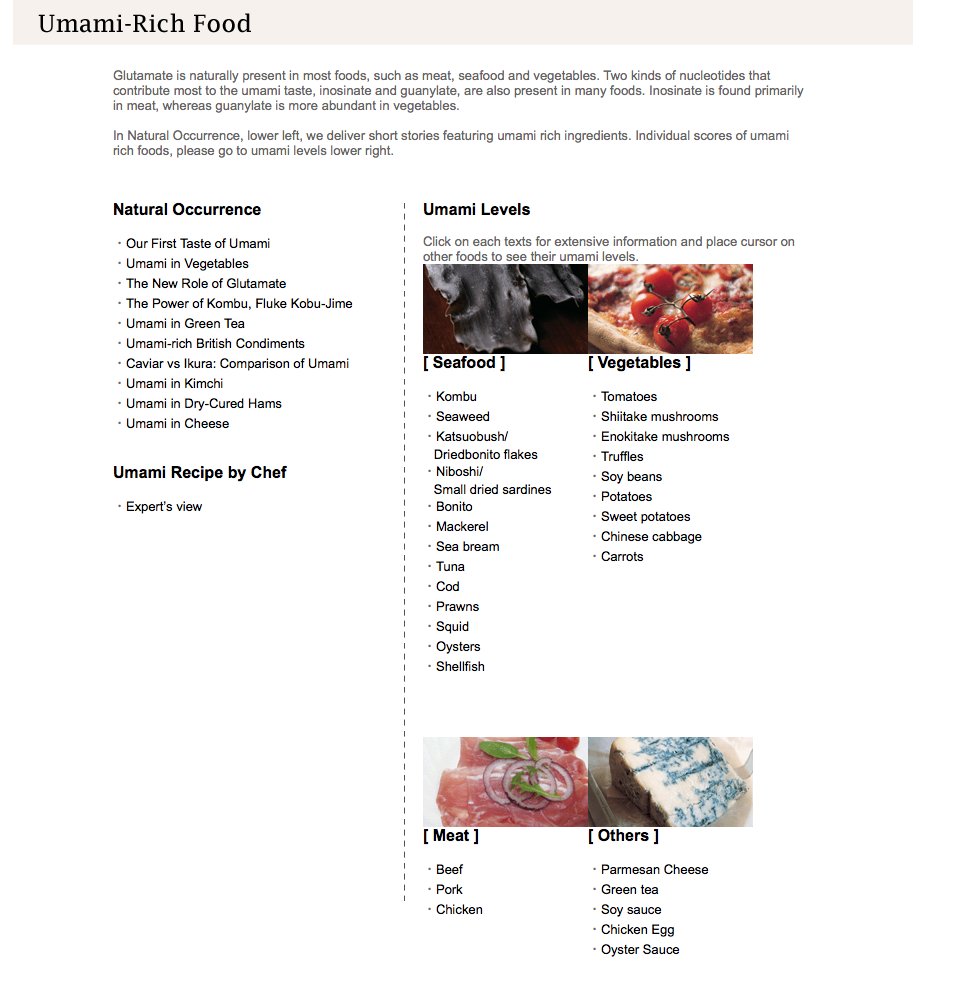