Trendy or Here to Stay? What is Celiacs and Gluten Intolerance all about?

From peanuts to shellfish, restaurateurs have entered the what we’d like to dub ‘The Age of Allergies.” Contending with different forms of allergies and dietary restrictions isn’t particularly new for our beloved industry, but there is a heightened level of awareness and demand for one particular restriction: Gluten.

One in five of us identify as ‘gluten-free,’ while the more severe form, Celiac Disease, has more than 330,000 card-carrying Canadians in its ranks. What exactly is Celiac Disease? According to the Canadian Digestive Health Foundation (CDHF):

“Celiac disease is a specific digestive disorder of the nutrient absorbing part of the gut called the small intestine. Celiac disease is a form of food allergy. In celiac disease, the immune system is reacting against gluten, a protein found in wheat, causing damage to villi and loss of surface area for absorbing nutrients.”

Beyond it being a disease that affects the body, it also affects the wallet.  Families affected by the disease spend nearly $150 million to obtain gluten-free foodstuffs - this is often the only and safest “therapeutic option for the disease.” These products come at a price as gluten-free products are 2.5 times more expensive than regular items. This affects not only the consumer, but you, the restaurateur and operator - and not to mention your kitchens and your bottom line.

So, what is considered ‘glutinous’? Count anything wheat-based as a no-no for your guests. If you’re looking to include gluten-free or celiac-friendly items on your menu, opt for non-wheat products; no pasta, no bread, no couscous or even wheat berry (and much more!). In some very extreme cases, diners will not be able to eat food that is not prepared in a safe, gluten-free environment - this means that your kitchens must be entirely free of the possibility of cross-contamination.

We know that there are legitimate cases of celiacs disease, but what of the cases where a customer claims to have an allergy but does not? The trendiness of a gluten-free diet has reached a peak in the recent years, thanks in part to a few celebrities. The often self-imposed restrictions shun anything glutinous - similarly to real celiacs disease. Non-celiac adherents of a gluten-free lifestyle claim to experience lesser symptoms and have reported (with no real scientific data) to experience symptoms ranging from blood sugar spikes, migraines, bloating, mood swings and poor concentration - these people suffer from something called “non-celiac gluten sensitivity.” Some do it for a fad, others due to some real effects on the body.

But is this vilification of wheat right? Is the grain to blame or is it the process of creating it that is? As cooks and chefs, we all know that some of the most timeless and classic meals contain wheat. From a delicate roux to a crusty italian loaf, these are mainstays and a part of our tradition of cooking. Beyond that, it’s obvious that wheat products have been around for such a long time for a reason: it’s packed with nutrients and offering fuel to burn out through the day. It’s a sad state of affairs when one cannot enjoy such a delicious staple, and it’s even sadder to say that bread is now an enemy to many foodies.

Thinking of incorporating some gluten-free and celiac-friendly items to your menu, or just trying out the diet? Here is a handy reference list for you: 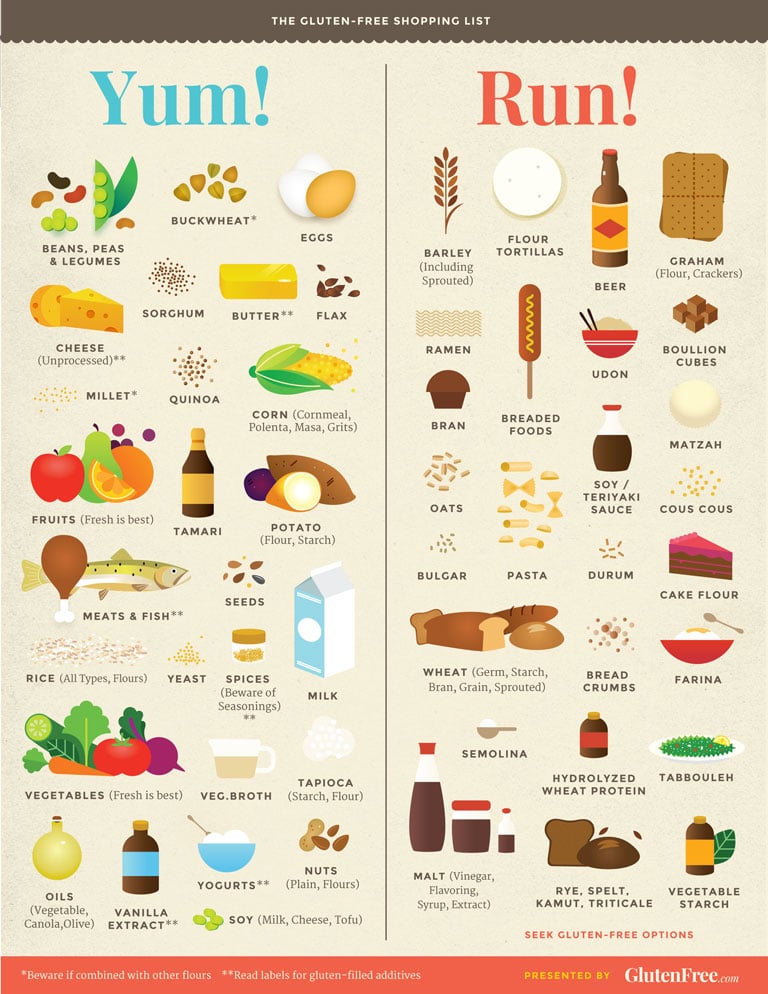